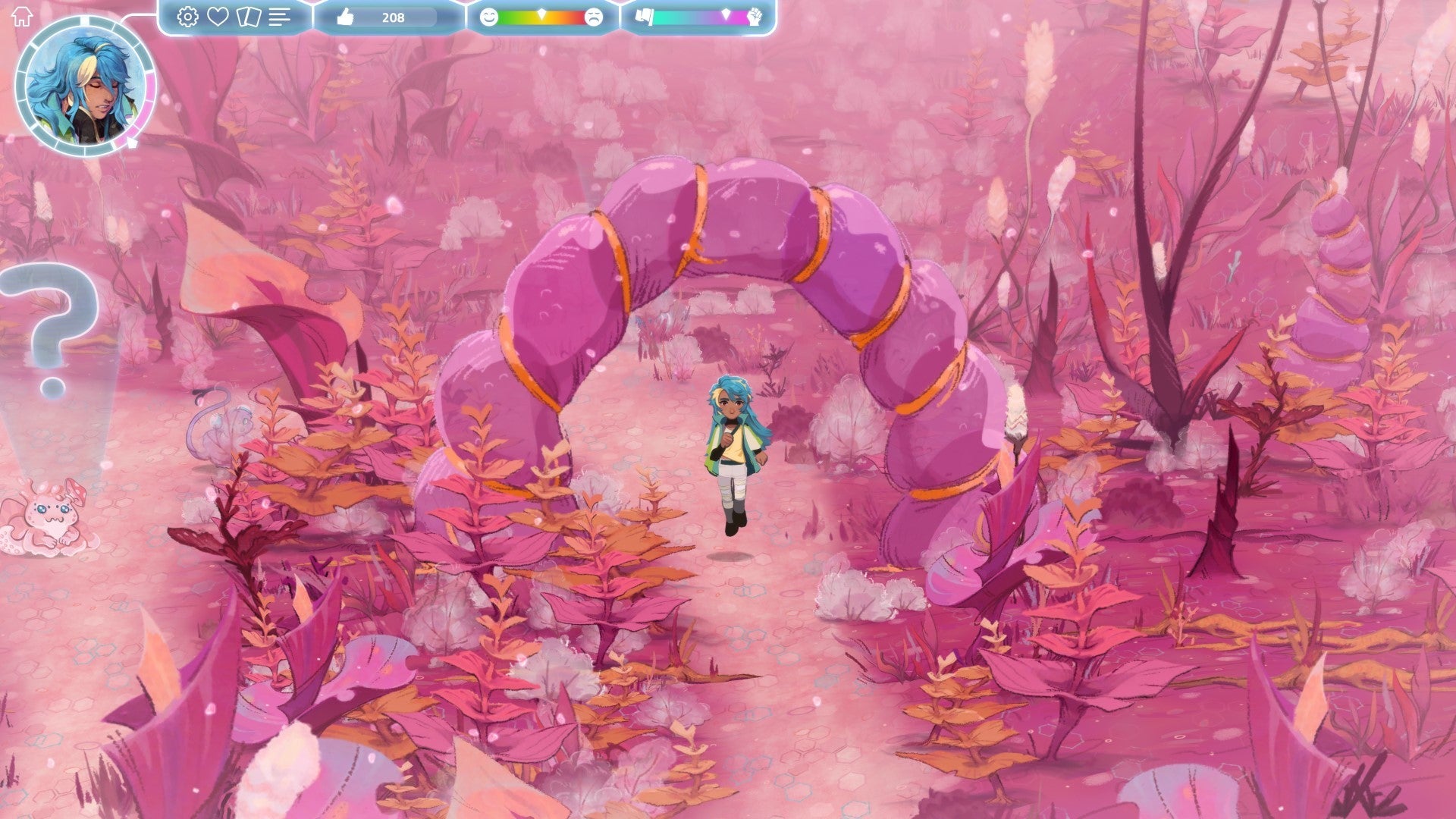 I can’t work out whether there are an unusual number of games concerned with memory being released this year, or if I’m just at the right moment in my life to notice them all. Anyway, to add to Hindsight and Arcade Paradise, here’s another. I Was a Teenage Exocolonist is the story of a child growing up amongst a group of people who are trying to make a new life on a distant planet. If you put the science fiction elements aside, though, it’s a game that explores the many ways in which our past experiences shape us. In other words, it’s a game about memory.

I was a Teenage Exocolonist

It’s a systems-heavy game, but as I’ve been playing the last few days I’ve been trying to look through that layer to get at the things I suspect the game truly seems to want me to see. In Exocolonist, you take your child from the age of ten up until they’re twenty. That’s it. But that’s also quite a lot, because I’m not sure there’s a decade more packed with foundational events than the years between your tenth birthday and your twentieth.

Exocolonist takes things slowly, too, with the rhythm of the game locked to the changing seasons of the planet you’re trying to make a life on. This is lovely, atmospheric stuff, as Quiet gives way to Pollen, and it’s neatly functional too. Each month you wander around the base, talk to the adults and any kids who are growing up alongside you, and you choose a single task to do.

I was a Teenage Exocolonist trailer.

These tasks – and almost every challenge in the game, in fact – reward you with specific stat boosts, depending on what you were doing. So a social task gives you better social skills, and a science task gives you better science skills. This is one of the ways your character grows and ages – you learn more and get better at things. But you also earn skills by forging relationships and exploring the environment. I guess that, even if you aren’t on a beautiful, somewhat hostile alien world, teenage years are all education anyway.

I’m getting drawn into the systems again, which is easy to do here. What I want to get at is this: to complete the challenges the game throws at you, whether it’s a month of learning to be an engineer, or a set-piece outside the gates of your settlement where you’re attacked by alien wildlife, you have to play a neat version of poker. You have to make hands of cards, or a series of hands, from the cards in your collection, and these hands have to add up to a certain number of points for you to be victorious. 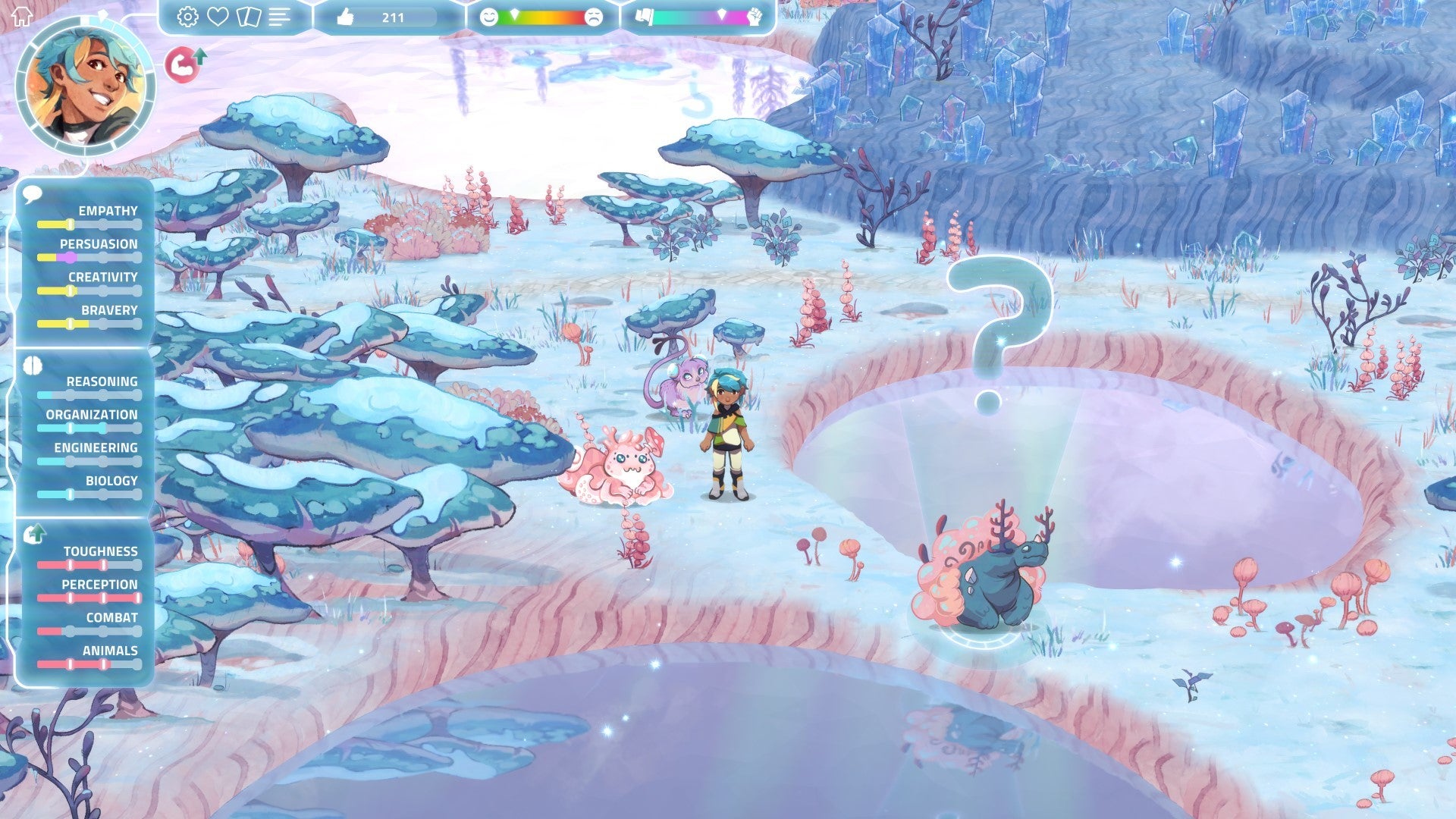 It’s a beautiful game when you’re out exploring.

It’s clever stuff, and there are lots of interesting rules to card placement, starting with matching colours and numbers, but moving on to boosts that are applied depending on the positions you play each card in. It’s fun to muddle through this and get to grips with it. Great.

But what I really love is the cards themselves. Because the cards are formative memories, and you get awarded them by making memories in the game. So you start off with a bunch of low value cards that cover things like giggling and learning to walk. Then you venture out into the world and make connections with others, and these connections and the events that shape your life all give you cards that you can use to make hands and win challenges.

This is brilliant, I think. Exocolonist is laying it all out here, making the case that when we’re challenged in life, at the point where we’re growing, what we often draw from – or are held back by – are our memories, the silt of lived experience, some of it good and some of it bad. This is education, and the process of growing up – not just experiencing things, but learning to navigate and appraise and interpret and reinterpret these experiences.

It came to focus for me with a particular mechanic that gives you a chance, now and then, to forget a card in your collection. There’s a solid game design reason for this, because your early memories are low scoring for the most part, and you want more high scoring cards coming out in the shuffle. And yet it’s odd at times, almost painful. Recently I had the option to forget learning to giggle. It was a card that gave me nothing at all, but should I really be without that? 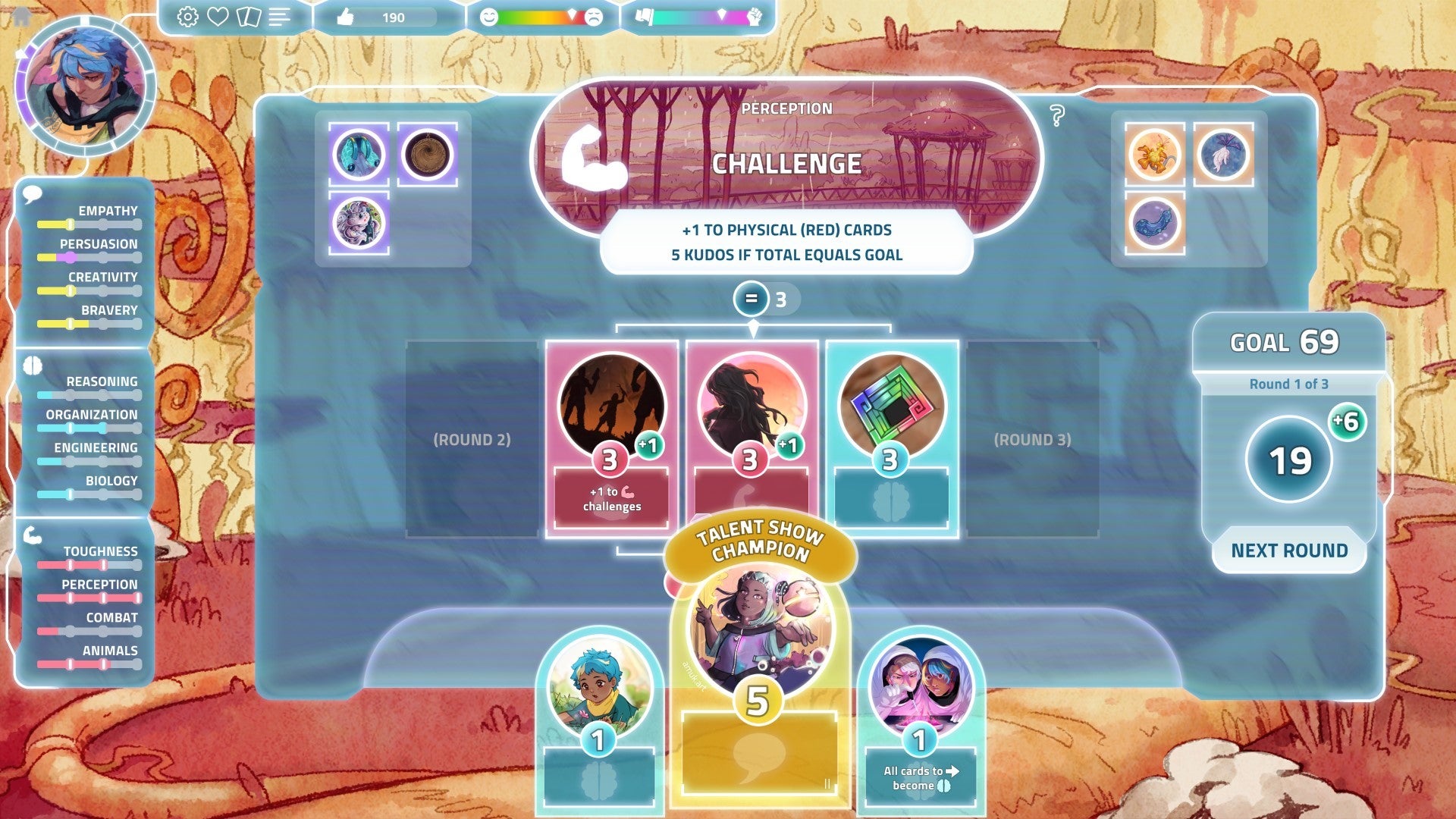 I love this stuff.

This mirrors the way we forget stuff as we age, I imagine, but what I love about it is that it doesn’t mirror it perfectly. To make this work in a game, Exocolonist has to make an unconscious process conscious. Nobody consciously chooses to forget something, although I’ve certainly wished I could over the years, and I doubt I’m alone in that. But by making the business of forgetting an explicit choice, it’s allowed me to notice a process which, by its very nature, I had never spotted or given much thought to before: the moment that a memory disappears for good.

Pardon the lurch into personal experience, but I have multiple sclerosis, which is a neurological disease, which in turn means that a lot of the brain’s processes can get a little muddled up for me. What I’ve noticed over the last few years, and what’s surprised me the most, is how much the human brain seeks to hide its workings. And yet when things go wrong – in the case of MS, for example – you can get to see this hidden stuff, albeit briefly.

To put it another way, I awoke one night shortly after my diagnosis and thought that my right eye had rolled down my face. I was sure of it, even though I logically and intellectually knew it hadn’t. And the reason I was sure of it was that it just really felt like it had. Logic and intellect is one thing, but I walked around for a week with my head tilted to the left to correct what I perceived as imbalance in my vision.

And what that told me, once I was able to properly think about it, is that there’s a layer between me and the world that I had never spotted before. There’s the world, then there’s my perceptions of the world. Fine. But what about the wonky vision? It suggested that I also secretly had a layer of perceptions about my perceptions, as it were, a layer that was ticking along quietly and assuring itself that both my eyes were on the same level. We live behind a sheet of glass, and sometimes the glass gets misted and we can briefly see it.

My eyes have stayed put for a while now, and this moment has in turn become a memory in itself. The fear and uncertainty of it has been smoothed away and it’s become an anecdote I use quite a lot – apologies if you’ve heard it before – when I’m talking about MS.

But ultimately, Exocolonist makes me realise that even that part of the story is interesting. Forgetting memories, creating new ones, shaping them and reshaping them. This is how we grow up, and maybe that process never really ends.

Previous articlePrepare to Journey to Beacon Pines Where a Single Word

SummaryBeacon Pines is a cute and creepy adventure game with a dark mystery and a...
Walkthroughs

This is my Hitman Blood Money Suit Only Silent Assassin on Professional Walkthrough put into 1 long Full...
PC

Random: Someone Made The “World’s Largest” Nintendo Switch, And It

It's time to discover what's occurring on the...

A new DLC package, featuring the aircraft skins of...

Meet the new outlaw, Eidaa, and get a look...

SummaryBeacon Pines is a cute and...

HunterX is an action-adventure platformer published by ORANGE POPCORN....

The record held by Eiichiro Oda’s One Piece in Guinness...

Need to knowWhat is it? An urban playground where...