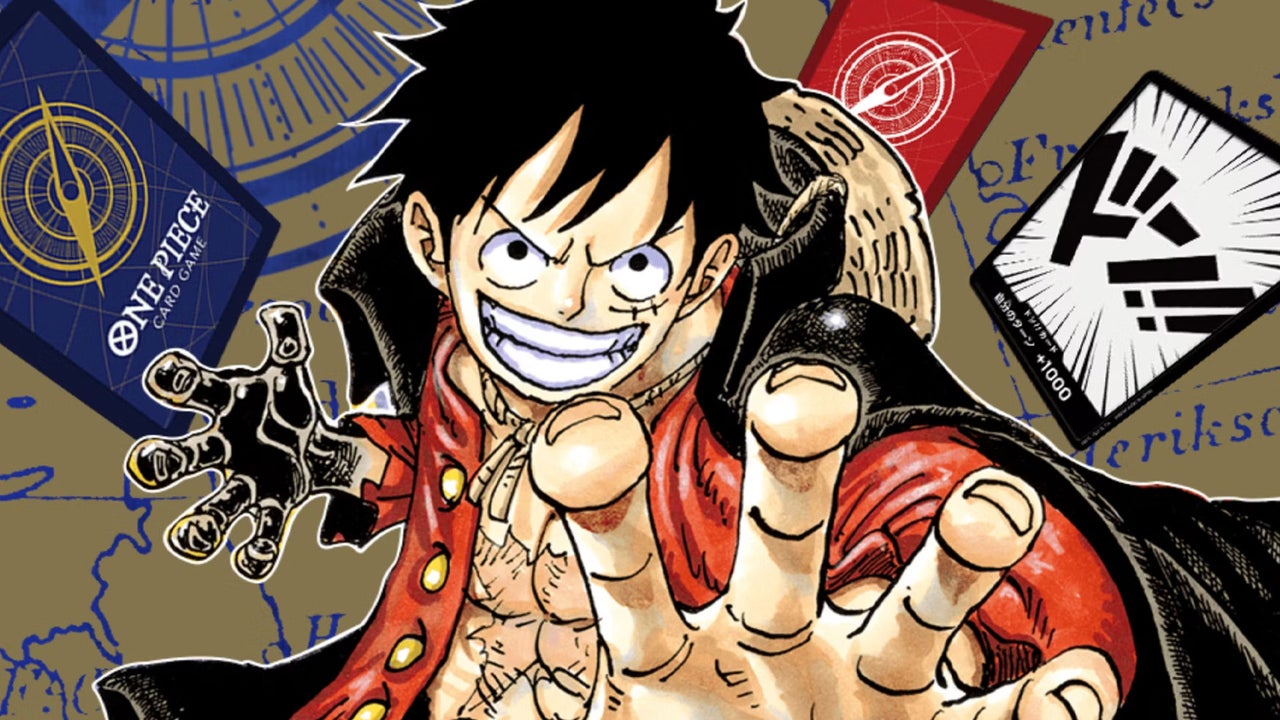 Yohohoho! The One Piece Card Game will make its official global debut this Winter, a few months after the Japanese release. In the meantime, events like Anime Expo and Gen Con are giving fans a little preview before the booster set and starter decks become available worldwide. In addition, the One Piece Card Game tutorial app is available right now for those that can’t wait. Aside from the amazing mix of One Piece art, this Bandai-produced card game has some familiar card mechanics that veteran TCG players may be familiar with.

The gameplay in the One Piece Card Game is pretty standard for TCGs. If you have played Magic The Gathering, Hearthstone, or the Dragon Ball Super card game, these mechanics will be very familiar. With that said, the gameplay can be pretty quick at the moment so there won’t be a lot of matches going to time. The goal is to bring your opponent’s life points down to zero, where you can then deal the final blow. To do that, you will need your leader and character cards to deal damage to your opponent.

Your deck will be built around your leader card. The leader card determines how many life points you have but also will be the main target of your opponent to win the game. It’s very interesting that the leader card will determine your health as most TCGs will have players mirror each other in life points. It’s a little concerning because certain decks thrive on getting damage fast, so lower life leaders are at a disadvantage from the beginning.

One Piece on the IGN Store

Alongside your leader, you’ll have character cards to also deal out the pain. Character cards are played by paying the cost of the cards as seen on the top left of each card. Like Hearthstone, you build up mana or DON!! cards each turn till the max of ten which will allow you to play these character cards onto the field. I don’t mind this sort of mana pool or build up in TCGs. I imagine that the card game will introduce more ways to manipulate the consistent mana bump like Heartstone has done with the system over the years. Be careful about how much DON!! cards you use each turn through because you may want to save them for event cards that will help defend your characters.

Event cards are like instant cards or spells in other card games to help you in certain situations. For instance, the Guard Point event card allows a player to give their leader or character 3000 more power during a battle as a counter. It costs one DON!! card to use, so if you used up all you mana or DON!! cards during your turn, you can’t defend with this card on your opponent’s turn.

Having a mana pool is nice to see as it allows for various interactions on both players turn compared to the Pokemon card game for example. Personally, it makes for fun and exciting interactions that can change the flow of the game. Finally we have Stage cards that have various benefits. Like your leader, you can only have one stage card on the field at a time.

Stage cards don’t have passive effects like Yu-Gi-Oh! field cards, but they have abilities that you can use each turn to support your other characters or leader. For instance, the Thousand Sunny stage card allows a player to rest or turn the card sideways to boost a Straw Hat crew character or leader by 1000 power. This is always useful when you really need to get that damage in. Overall, the gameplay isn’t super unique but it makes the game that much more accessible. I just hope to see more interaction with your deck or trash area like searching, recurring, or scrying, because the demo deck and tutorial app doesn’t give players much to work with outside of aggro cards.

Like other card games, there are multiple colors or archetypes in the One Piece card game. As of now, there are four announced starter decks: Straw Hat Crew, Worst Generation, The Seven Warlords of the Sea, and the Animal Kingdom Pirates. The Straw Hats look to be red cards which usually means they are typically in aggro or aggressive decks that rely on quick damage. The Worst Generation is a green deck which in this game means a lot of card activation. This could lead to attacking again with characters or refreshing your DON!! cards to play more cards. The Seven Warlords of the Sea is a blue deck which typically means a control deck. Similar to other card games, blue cards can bounce back a character from the field back into their owner’s hand or deck. The last starter deck, Animal Kingdom Pirates, has a mechanic that allows players to reduce their DON!! card count to do powerful actions like destroying an opponent’s character card. This purple deck has ways to ramp up its mana, which offsets the powerful high cost cards. Judging from the Luffy leader card in the demo deck, some leaders can be multi-color which can lead to a variety of deck combos than just mono color decks. So maybe instead of a Straw Hat Crew deck, you might mix in some of the Worst Generation characters to make a red and green Supernovas (Super Rookies) deck. In other words, there may be some room to brew some unique decks than the more obvious tribal or category decks.

Last but not least, the One Piece art is what fans are probably most excited about. The card game will pull art from the manga and anime but will also showcase totally new unique art. Bandai gave some teasers already showing off new Sabo, Trafalgar Law, and Roronoa Zoro designs.

Bandai was kind enough to provide a demo deck and promotion pack so you can see all the available English version cards so far in all their glory. It seems like the higher rarity cards will be getting cool sleek design treatments, which isn’t too much of a surprise. Good luck to all you collectors out there!

The One Piece Card Game is Bandai’s latest TCG, and after going hands-on with the game, it mostly resembles the Dragon Ball Super Card Game, followed by Hearthstone. The gameplay is simple and leaves room for some spicy moves. I can see other mechanics making their way into the game as more sets are released over time. The One Piece Card Game will have its Super Pre-Release Event soon – between September and October – with the full global release this Winter.

Fight to survive on a hostile planet, a massive fantasy world, or to qualify for...
Nintendo

If there’s one thing I’ve always appreciated about the Kirby series it’s that it has never been afraid...
Nintendo

When you were a kid, "sandbox" meant "small plastic box, usually full of sand and ants, which lets...
Nintendo

Image: Altitude FilmsAs we all wait for the re-release of GoldenEye 007 that may or may not happen...

Readers’ Opinion: Which Classic Series Should Return to PS5?…

Readers' Opinion: Which Classic Series Should Return to PS5? Whether...

Fighting in Elex II can take...

Experience the immersive world of The Ascent on PS5, out

Greetings fellow indents! Whatever you understand will change....

This is Guts 'N Goals, where soccer balls can...

Upcoming Nintendo Switch Games And Accessories For March And April

Finding the Eye of Horus and placing it on...

A New South Park Game Has Been Teased

In this video I aim to bring you some...

This next survival game could be...