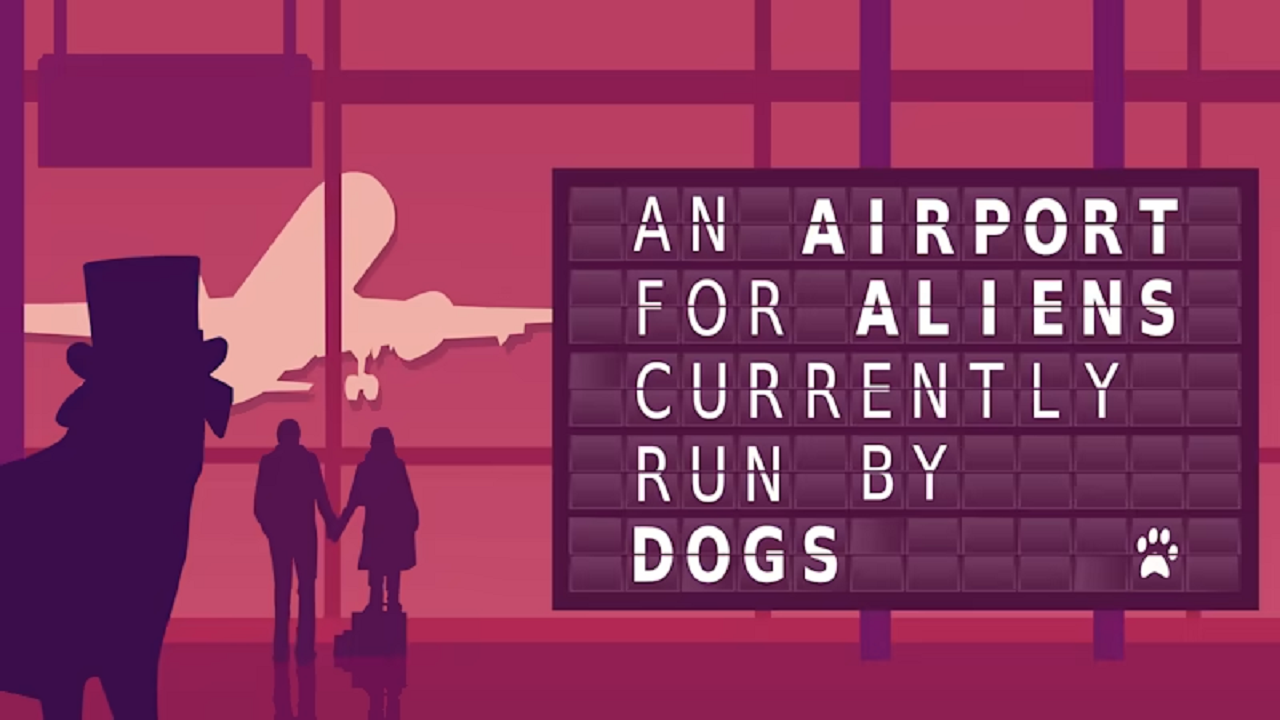 It’s amazing how detrimental a few bad choices can be. An Airport for Aliens Currently Run by Dogs has genuinely great comedy and a delightfully zany soundtrack and sound effects. But the repetitive fetch quest gameplay and extreme lack of design polish seriously hamper the experience. And then there’s the price….

Throughout your first-person journey, you’ll meet up with your fiance across multiple airports run by jpeg dogs. I’ve gotta say, I really love the idea. It feels like too few games these days can come up with such a bizarrely fascinating premise. You’ll have to navigate through the alien airports to make flights and collect many, many items that you’ll need to trade with the jpegs for both progression and side-quests.

Unfortunately, the airports themselves are hideously designed. The game itself looks as good as most poorly made Steam or mobile games, and the designs of the airports tend to match. Shops that provide items are thrown about in an unorganized mess, and the layouts tend to be a pain to navigate. Wandering around the airports is an absolute chore, and the various bugs and glitches make things even worse.

For instance, the ‘A’ button is mapped to drop items but is also (as usual) how you select things in menus. The game often drops items with ‘A’ even while in menus, so I was constantly having to chase down items my guy dropped upon exiting them. Also, never stand on top of a shop. Your movement slows to a halt (I think the game thinks you’re falling?), and it takes forever to walk off them. I also got softlocked a couple of times and had to reload my save.

Thankfully, the writing saves the experience from being a total loss. Your conversations with your finance are genuine and both humorous and heartfelt. The jpeg’s you’ll meet have a lot of bizarre and fascinating things to say, and the humor often landed. I was constantly chuckling while chatting with the NPCs, though you’ll hear the same dialogue again and again because of the fetch quests. I thought the ‘cabinet dog’ was hilarious the first time I talked to him, but his charm was lost upon the fifth or so revisit with the same lines.

I do want to give a special shout-out to the sound. The more I played, the more I enjoyed the wonderfully kooky tunes. I liked how many of the sound effects are done by voice (for instance, taking a picture sounds like a guy going ‘ch-khht’). It gave off a strong Homestar Runner vibe, and as someone who loves H*R, it really clicked with me.

Overall, this game has a great concept that lands with its writing and sound but is brought back heavily by the repetitive gameplay and awful airports. I would be inclined to recommend this cautiously, but the price is insane. They’re asking $19.99 for this! The price is just high, and I would have been really ticked off if I had spent the full price on this. There’s some fun to be had here, but only if there was a heavy sale.

Watch the trailer for a breakdown of what to expect with the upcoming paid Happy Home Paradise DLC...
Playstation

The Callisto Protocol features a lot of different ways to die - and will reward you for being...
XBox

Where to discover map fragments in Elden Ring

The Lands In between is huge, but you...

Hideo Kojima has a new podcast, but you may have

Love him or hate him, Hideo Kojima has had...

Ever since its debut at the PlayStation 5 digital...

When I initially booted Get Packed: Couch Turmoil,...

It’s time for yet another...

This video is a complete full game walkthrough of...

Can video games help improve hand-eye coordination? Can they...

MultiVersus was the best-selling game in the U.S. last...

The Callisto Protocol features a lot of different ways...