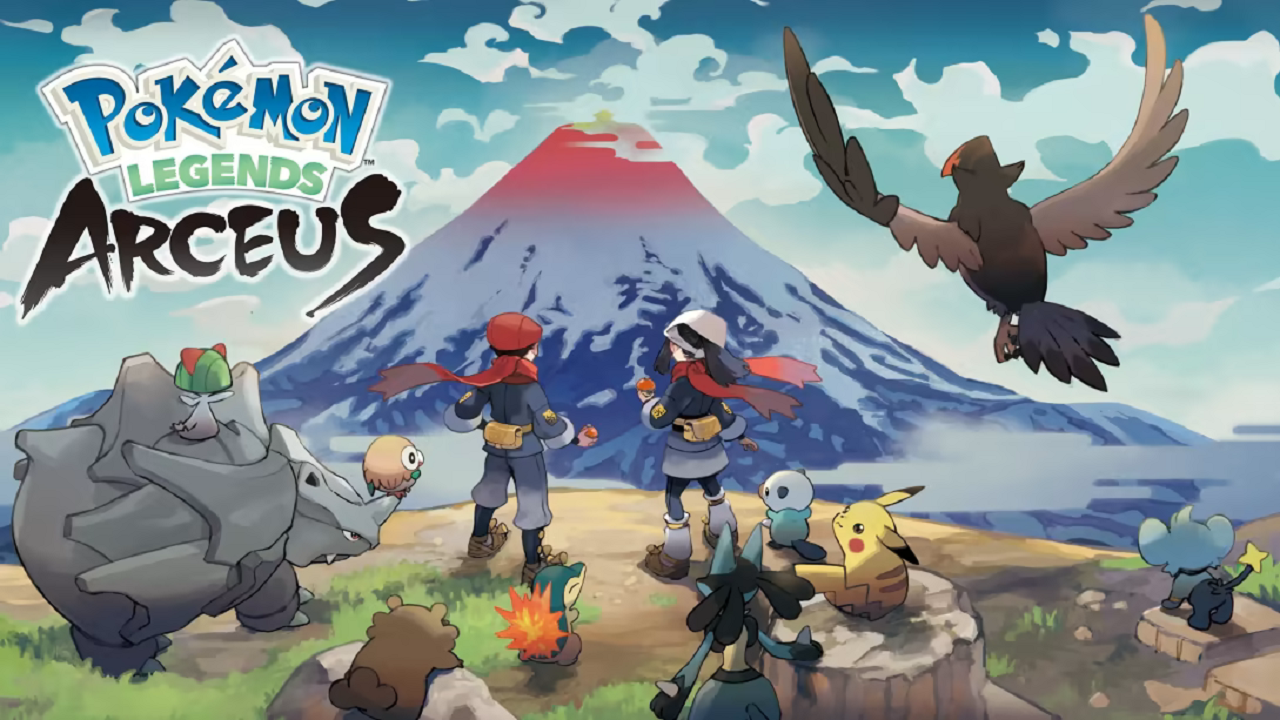 Pokémon Legends: Arceus might be the most excited I’ve been for a Nintendo game in recent memory. I enjoyed Sword and Shield and actually liked the Diamond and Pearl remakes, as well. I couldn’t stand Let’s Go, Eevee/Pikachu! but I did like the idea of playing Pokémon on a console, something I haven’t been able to do since “Pokemon XD- Gale of Darkness” on the GameCube. Legends of Arceus promised something different with its initial trailer, a Pokémon open-world game that many instantly nicknamed Pokémon – Breath of the Wild, which actually isn’t that far off the mark.

While it isn’t strictly open-world, some factors are entirely different from any other game in the series. You are sent back in time from Arceus himself to the region of Hisui. At this time, Pokémon and humans don’t have the partnership we’ve all come to know. Instead, they can attack you if provoked and hurt the trainer, not just the Pokémon they’re fighting. In Hisui, you are tasked with helping to create the first Pokédex, and with this, the game really starts to unfold. The game prides itself on exploration, encouraging you to go to every corner of each region where you will be rewarded with random Pokémon appearing or new items found. Instead of battling random trainers and getting gym badges, the central theme of this game goes back to the heart of Pokémon: “Gotta catch ‘em all.”

You’re not just catching one Pokémon and moving on, either. Each Pokémon has multiple tasks to be done before you complete its entry. Tasks vary from using a certain move an amount of times to defeating them in the wild or catching a certain number of them. You are rewarded when you complete a full entry for each Pokémon, and this is how you progress.

Additionally, there are larger variations of each Pokémon called Alphas, which are physically bigger as well as higher-leveled than the normal versions in the same region. I was 20 minutes into the game with my starter at level 11 when I encountered an Alpha Pokémon at level 45. It was a welcome change of pace from the last few games that I felt were getting too easy, and my whole team was easily defeated. Not unlike the Lynels of Breath of the Wild, I avoided the Alpha Pokémon until I was ready. They aren’t necessary to battle, but they present a welcome challenge when you are brave enough to try.

Without spoiling the story, Pokémon Legends of Arceus takes a different path than most of the other games. They have abandoned the ‘get eight badges, conquer the elite four, catch the cover Pokémon’ strategy, which was getting awfully repetitive. Additionally, in this game, you can sneak up on Pokémon in the wild and just throw Pokéballs at them without battling. Having the option not to fight or paralyze/put to sleep a Pokémon, and then throw a Pokéball just saved so much time and was more fun.

I think this game was made for older fans who wanted to see the removal of the issues that were growing stale in the series. Game Freak took the Wild Area from Sword/Shield and implemented it into this whole game, which I absolutely loved, as the Wild Area was my favorite part of that game as well. The weather and time of day affecting different Pokémon coming out encourages you to check every inch of the Hisui Region. Additionally, because this is a game taking place in the past, crafting is a component. You create your own Pokéballs, and you can create different kinds of Pokéballs to catch different Pokémon. I found this to be a fun innovation and another time saver. Instead of having to fly to a city with a Pokémart, I could instead just craft 20 new Pokéballs and continue hunting in the new area I just discovered.

While the changes are encouraging not just for this game but for the future of Pokémon, there were parts of it that felt rushed. Pokémon graphics are never top-notch, but there were a few times where the buffering was noticeably bad, especially for flying Pokémon. Sometimes a random Zubat would seem stuck in the air. Or, as you would be walking to a new area, the Pokémon would appear before the grass, and then when the grass would show up, the Pokémon would disappear for a moment. This was extra noticeable because you can lock onto Pokémon as you try to catch them in stealth mode. To have them just disappear as you grow closer was frustrating.

The game is also significantly different from other major titles in the past, but the number of cutscenes became extremely frustrating; to the point where I would postpone continuing the story so I could continue growing my Pokédex and avoid a future five-minute cutscene. A lot of them seem to be unnecessary and instead could just be a pop-up directing you to go somewhere. Pokémon titles never use voice actors either, so it’s just a lot of reading that can’t be skipped about missions you can figure out pretty quickly. For a game that seems to be appealing to an older audience, this hand-holding and constant interruption was annoying and threw off the momentum.

All things told, though, this is one of my favorite Pokémon games of all time. The world is incredible, the Hisuian Pokémon are designed terrifically, and the game is more challenging than almost any other in the series. While it’s not as great as Breath of the Wild, it felt similar in terms of the storyline not being that strong but the exploration and design aspect making it special, especially crafting and discovering new things. Beating the game wasn’t that important to me because it’s honestly not that type of game, but this is a world where I will continue to explore and play for months. Not only is this a fun and innovative Pokémon world, but it shines a light on the next steps of what Pokémon can be. With more time and attention to the graphics, the next game can be really special, and something fans who started from Red and Blue wouldn’t have imagined was ever possible. To start from the little 8-bit Pallet Town in 1998 to become what Pokémon is now is truly remarkable. This is why it is Nintendo’s greatest franchise.

Spring Brings an Entire New Closet to A Gummy’s Life!