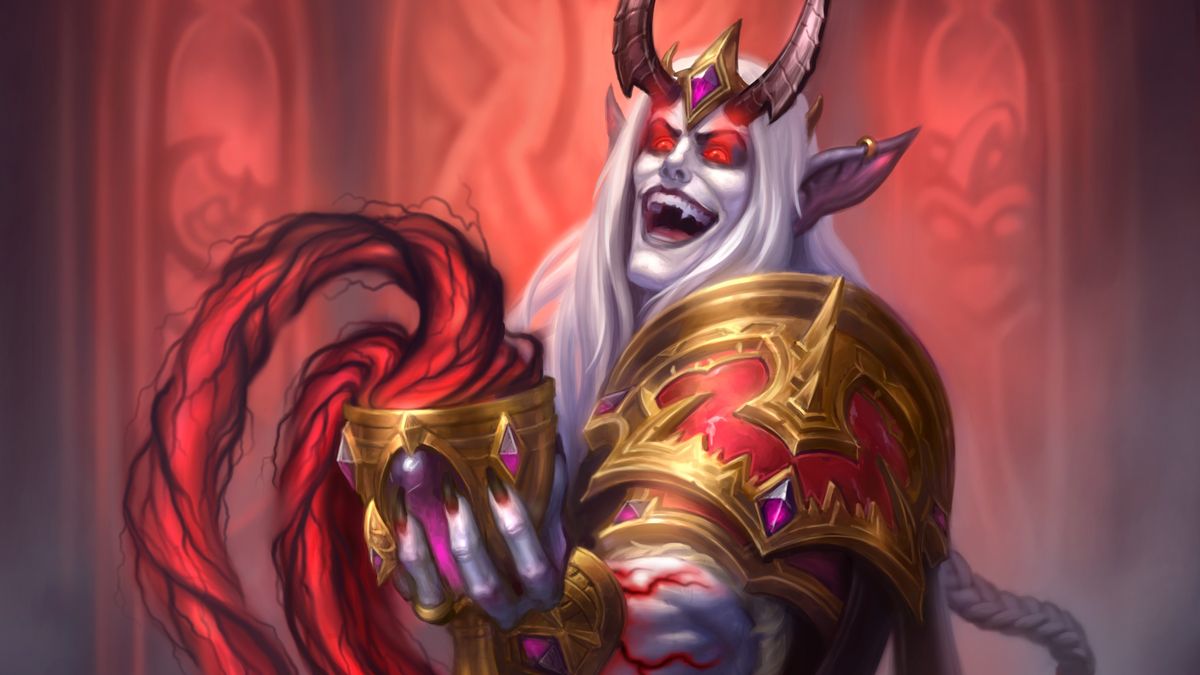 Earlier today Blizzard detailed the new quest mechanic coming to the Battlegrounds mode in next week’s big update, and as promised we can exclusively reveal all of the remaining quest requirements. But, before we get to that, let’s check out the two new heroes being added to the rotation when patch 24.2 drops on August 30. It’s no surprise that both have a major part to play in the recent Murder at Castle Nathria expansion, so let’s start with the victim: Sire Denathrius.

Sire leans hard into the new quest system, giving you the chance to pick from two at the start of the game, and then another when turn four (six gold) rolls around. Being able to have two quests on the go simultaneously, it stands to reason that you’ll see the best results from picking conditions that synergise with each other, potentially enabling you to stack multiple rewards early. Equally obviously, this isn’t going to be a hero power that keeps paying dividends into the late game so you’re going to want to scale fast. “Denathrius is extremely flexible,” game designer Mitchell Loewen tells me. “I’ve seen very greedy strategies. I’ve seen very tempo-oriented strategies. It’s going to be so dependent on what quests and rewards you’re offered.”

Next up, who else could it be but the amphibian detective extraordinaire himself: Murloc Holmes. His hero power costs 0 gold and asks you to guess between two minions. Pick the one that your opponent had in play at the start of the last combat phase and you’ll be rewarded with a coin. This strikes me as a much easier ask than Lord Barov’s gamble hero power (and naturally the payout for winning is smaller), so much so that it should be a reliable resource generator.

There’s kind of some sneaky logic behind it

Again, having a coin per turn matters much more earlier on, enabling Murloc Holmes players to make accelerated starts. Loewen agrees that this is very much a classic economy hero, but the goal is also to make players feel clever. “We tried to think about scenarios and clues that you could try to look for,” he says, noting that the scoreboard is a key source of information.

Interestingly, the minions you’ll be asked to guess between when playing as Murloc Holmes won’t be entirely random. Lowen tells me that there’s some canny AI being used behind the scenes to ensure the choice is challenging. “There’s kind of some sneaky logic behind it,” he says. “Dominic Calkosz was one of the other designers, and it was very much [his] labor of love making that hero come to life.”

Here are all the Battlegrounds Quests coming in patch 24.2

Below you’ll find the 10 quest types that weren’t revealed with the initial announcement this morning. Note that the exact requirements of each quest will vary depending on the power of the hero you’re playing, and some won’t be offered if they aren’t suited to the pool of minions in that particular game.

A lot of the quests ask you to do the kind of things you’d be interested in anyway—buying minions, buffing their stats etc.—but some are a little more leftfield. Sort it All Out tasks you with ordering your minions from lowest to highest for four consecutive combat phases, while Unmask the Culprit wants you to lose or tie three rounds. Though that might not be such a handicap if you turbo level during those turns.

As noted by Hearthstone community manager Alkali Layke: Exact quest requirements will change based on which reward it’s paired with. Certain rewards require a higher difficulty level to achieve in a quest to obtain. Example: Trigger 6 Deathrattles could increase to a higher number when paired with different reward combinations.

With that in mind, on with the show…

Sort it all Out: Order your minions from lowest to highest Attack for 4 combats. (Image credit: Blizzard)

Editor’s note: The quest above was missing when this post first appeared. Thanks go to the sleuths who realised a crime had been committed.

In case you’d forgotten, the three quests shown as part of the original announcement can also be found in the screenshot embedded underneath.

With Hearthstone players often logging more hours in Battlegrounds than the original version of the game these days, changes to the mode’s mechanics (and monetisation) are both highly anticipated and heavily scrutinised. Speaking to Blizzard yesterday, it’s clear a long-term commitment is being made to Battlegrounds, with significant resources being dedicated to the mode.

New heroes will of course keep coming, and feature changes like quests will keep the meta fresh, but in the long run I suspect the most significant part of Patch 24.2 is going to be that rewards track.

Subscribe to Nintendo Life on YouTube After announcing the boomer shooter Prodeus would be arriving on the Nintendo...
Trailers

The creative director of Hell is Us, Jonathan Jacques-Bellêtete, walks us through the three narrative layers of the...
Playstation

Gamers have until Sunday, September 25 to complete the demo, with survivors earning a special “Crouching Dragon Helmet”...

Grab a Mask and Rule the World in Covered

Don’t ever stop dreaming. If you are anything like...

Cyberpunk: Edgerunners Debuts New Trailer and Images Ahead of September

Cyberpunk: Edgerunners is set to plug in on September...

Gigabyte is launching a tricked out 43-inch quantum dot 4K

At what point does a gaming monitor morph into...

From my time with its early hours, Soul Hackers 2...

SummaryNBA 2K23 is available today for Xbox One and Xbox...

Can video games help improve hand-eye coordination? Can they...