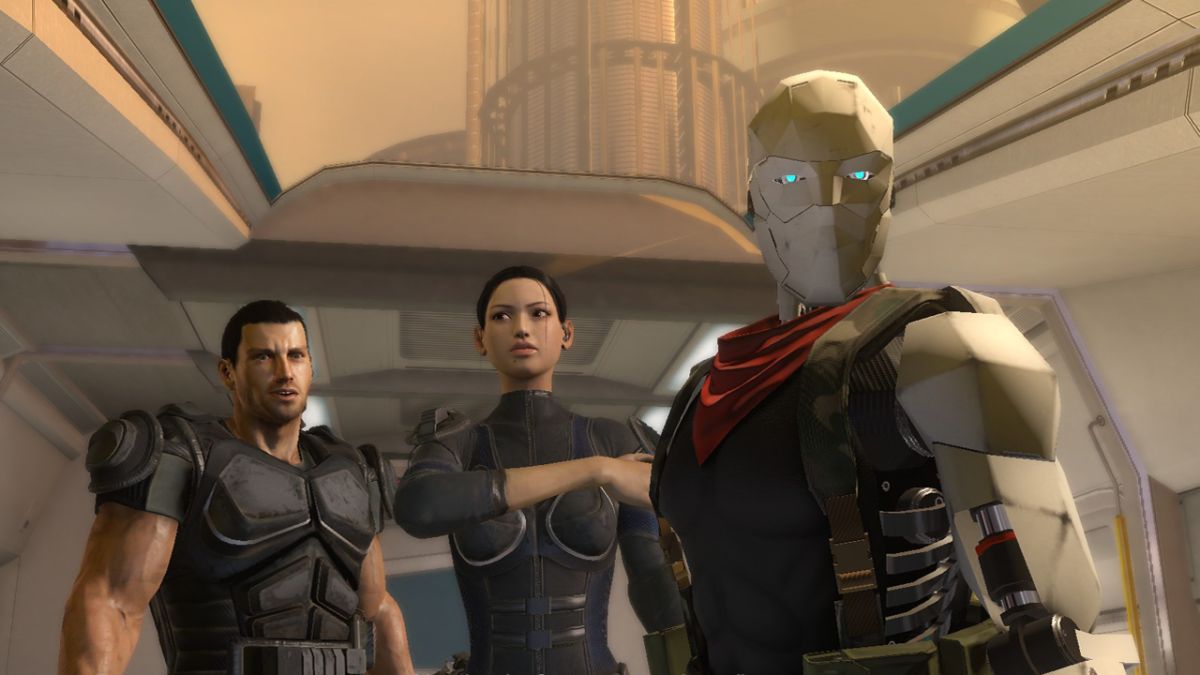 It’s perhaps not a question that’s troubled classical scholars, but it’s relevant here. Because my memory of Binary Domain is vague and hallucinatory, like something from a Michel Gondry music video. I recall a game that scored 70%, lost 5 points for repetition and another 10 for shitty boss battles, then clawed 20 back in hindsight for being a laughable cult classic. But I remembered it wrongly. Actually, the rock-rolling element of Binary Domain is simply magnificent. If Zeus cursed me to shoot olive robots in neo-Tokyo for the rest of time, only for a fresh dropship of enemies to arrive at the end of every level, I’d pretend to be sad so he didn’t find a more upsetting punishment.

The base game of Binary Domain is deeply satisfying—a burly, competent cover shooter with an infectious central gameplay loop. It’s wonderful seeing glittering shards of scrap metal going flying off your robot foes. Most standard enemies are the right kind of slow and stupid, just agile enough to make you feel good about yourself when you explode their shiny metal heads. It makes me realise the only thing wrong with Binary Domain is that it tries to do too much, fussing and fluffing like an anxious vicar about to meet the head of the Women’s Institute. But instead of offering an unnecessary proliferation of iced buns, Binary Domain insists on execrable boss battles and broken squad comms.

It’s like a TV Tropes page for third-person shooters. It’s not enough that there are turret sections; they have to happen during boss battles and also incorporate a tedious reloading mechanic and blundering NPC interaction. There’s a bit where you have to fight poison gas and security droids in a futuristic cannabis farm, shooting shit you can’t see while your suffocating teammate shouts at you. You even get to ride a Jetski out of a sewer, like Terminator and Police Academy 3 had sex and made a setpiece. There’s far more variety here than I’d ever trust my brain to accurately remember. I would never have believed, for example, there was a bit where my team trundled around a car factory in little pods, like armed revellers in an unfurnished ghost train, but there it is. The problem is that most of these diversions are less fun than charging forward into cover and shredding metal enemies with a machine gun, but on occasion it bangs. The section on an elevated monorail, for example, is exhilarating, even if it is just a fast corridor with windows.

I also have a special place in my heart for the cast of Binary Domain. Protagonist Dan Marshall is one of gaming’s great dickheads. Controlling him is like playing as a Kevlar fistbump—a no-hands wheelie of a man whose favourite phrase is ‘holler if you’re dead’. You get to carve out some of his personality via custom responses to your team’s questions, but answering with anything even vaguely polite seems like a betrayal. But Dan seems positively nuanced compared to the rest of the team. We have Cain, a French robot who sounds like Poirot trapped in next door’s dustbin; and Commander Charles Gregory, a character who’s 70% posh British first names and 30% romantic lead from a Netflix Christmas film. Elsewhere there’s a short-haired demolitions expert Rachel, whose character type is ‘the one you’re not supposed to fancy’, except I do; and Big Bo, a crayon drawing of an African American who’s like someone gave an ice-cream truck guns and taught it how to party.

Any attempt to add depth to the characters in Binary Domain is slightly undermined by the limited trust system. You build rapport with teammates by killing enemies with them and saving them when they’re downed, but there’s a conversational element, too. It’s fun, even if your options are mostly limited to ‘yes’, ‘no’, and ‘dammit’, and you mostly win points for agreeing with everything they say. Yes, inequality is bad. No, we shouldn’t start shooting up the coffee shop. There’s even a bit where you get universal approval from your team by not agreeing to romance a 15-year-old girl, which seems like rather a low bar, even for a throbbing gonad like Dan Marshall. It’s clumsy, but it does add some welcome texture.

There’s also some interesting stuff with Faye, an impeccable sniper from the Chinese People’s Liberation Army, who also acts as a love interest for Dan. The story goes to some unexpected places, asking questions about machine intelligence and what it means to be human, but it ends up feeling like the cup noodle version of a Kojima cutscene. Deep existential questions are avoided in favour of romance. Choices are made because Dan fancies someone, not because he’s reevaluating the fine line between sentience and AI. And honestly, I’m sort of fine with it. It feels like a very Binary Domain way to deal with debates about transhumanism.

There are some bits that simply don’t work. For whatever reason, I couldn’t get voice commands to function, so my first forays into the game were amazingly awkward. Bo would ask me a simple question and we’d have an excruciating pregnant pause while he waited for an answer. Yes, Bo, we should shoot the robots. In the end I had to turn voice commands off completely, but not before I got to try the calibration tool, which deserves a mention just because the choice of words—shit, damnit, shitdamnit—is telling. Pad integration, if you chose to live that way, is shaky, too: onscreen prompts are still mapped to the keyboard, which adds an unwelcome layer of danger when it comes to in-game conversation. I managed to press the wrong button after a romantic cutscene with Faye and called her an idiot, which felt like too much of a jerk move even for Dan.

Other wrinkles are more frustrating. There are moments when you’re peppered by missiles from unseen enemies. Squadmates strafe into your line of fire then complain about it. And, on occasion, ammo can be frustratingly scarce, which feels like a terrible sin for a game with shooting this gleeful. The signposting is also terrible. It eschews in-game highlights in favour of dragging camera focus, which simply doesn’t work. It’s vague and frustrating, yanking your attention away from the action like a violent toddler holding hair straighteners.

But despite all this, I absolutely forgive Binary Domain. I love its lunkheaded, clumsy honesty. I love the crisp, metallic cleanness that you only seem to get with games from the early 2010s, like a shiny, favourite shirt that’s been ironed too many times. And, in fact, maybe I’m looking at it the wrong way. The misguided diversions that stop me doing the thing I adore—basically destroying green robots until my PC becomes obsolete—actually make those bits more appealing. Perhaps there’s an alternate version of Binary Domain where I don’t have to fight a robot gorilla too many times or get chased by electric spiders, and it actually makes me love the shooting less. The lesson here? Maybe all Sisyphus needed to appreciate his eternal punishment was a day spent rolling lots of different, smaller, more annoying rocks up the same hill.

Let’s rock, baby! Season 6 of Video Gameography gets stylish as we examine the Devil May Cry series! Over the...
XBox

Check out FieldSense and all the other new Madden NFL 23 features during Free Play Weekend from September...
Nintendo

Mothmen 1966 Is A Pulp Mystery With 8-Bit Home Computer

Call of Duty Xbox Exclusivity May Be Blocked by Regulators,

Shopping for bargains? Try these storesLast updated: March 9.A...

If you’re familiar with most games, chances are you’ve...

Let’s rock, baby! Season 6 of Video Gameography gets stylish as...

Mortal Kombat 9 Walkthrough Part 1 and until the...