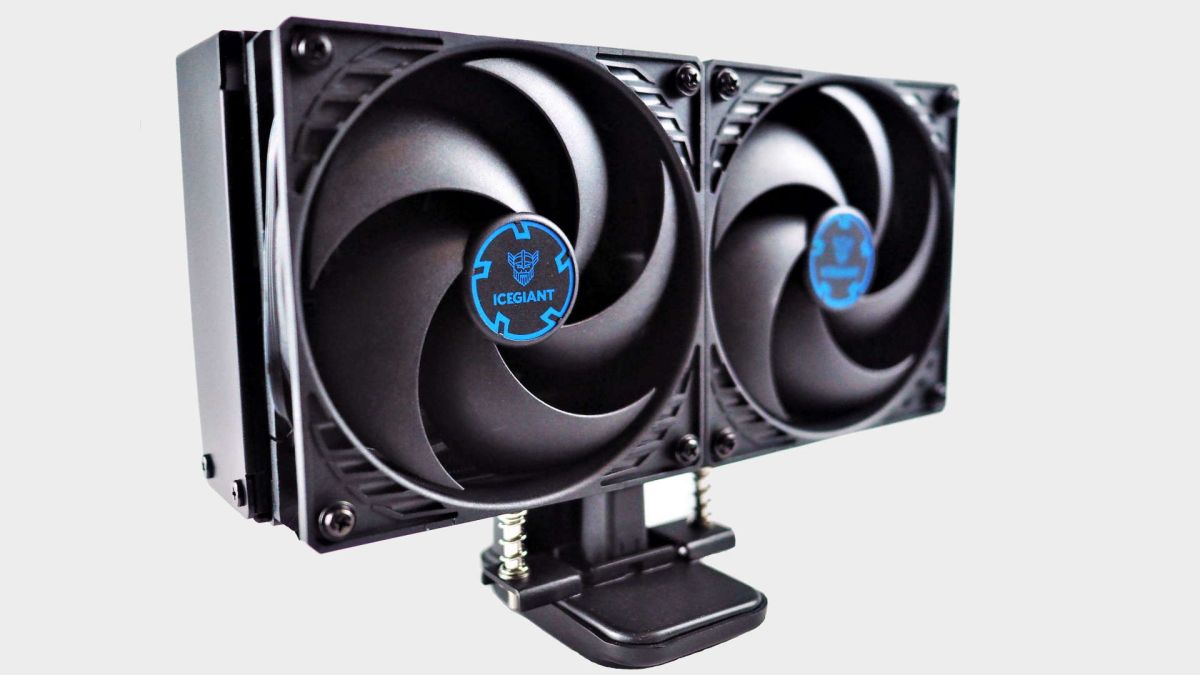 Do not adjust your set, that is a CPU air cooler sitting on top of a normal sized ATX motherboard. That is not, I repeat, that is not a mini-ITX mobo. Yeah, the IceGiant ProSiphon Elite is not only an object lesson in camelcase or interCaps, but is also one of the biggest chip-chillers I’ve ever seen jammed on top of a processor. And I’ve tested that chonky ol’ boi, the CoolerMaster V8.

The ProSiphon Elite actually looks like someone lopped the tubes off an AIO liquid cooler and just screwed the whole radiator atop a CPU. But the IceGiant design uses a vapor chamber inside that rad, similar to what you’ll find on top of many a graphics card these days. The heat from the chip boils a little liquid in the chamber into vapor, pulling the heat away from the processor, which then travels around the condenser, turning back into cooled liquid and dropping back down to the CPU.

Thanks to the fact there is a long way for the vapor to travel, and a whole lot of push/pull fans in operation either side of the condenser, this thing is rated to cool anything up to an AMD Threadripper chip or those big high-end Intel beasts. And has the fat thermal plate to prove it.

It also costs $170 and weighs in at 4.4 lbs (2kg) so you’ve got to feel like you’re really getting a lot of solid aluminium for your money, and you’ve got to then hope your motherboard is built to last too. To put that into some context, that’s the same weight as the Gigabyte Aorus 15G gaming laptop.

But why not just use an equivalently priced AIO liquid cooler? IceGiant says that, because it’s just one big, single component (apart from the fans), there are fewer points of failure.

Which basically means: No pump, no problems.

Then it also points out that it’s using dielectric fluid, not water, so there’s no danger of dripping all over your expensive kit.

To be fair, I’ve been lucky enough to not have had a pump fail on me in fifteen years, and the only time I sprayed water on my PC while liquid cooling was when I tried to build my own custom loop back in 2006 by bolting an entire discrete radiator onto the side panel of my chassis.

The ProSiphon Elite has actually only come to my attention after reading HardwareLuxx reviewing it and the damned thing just dominated my browser for a long while. I have to say I’m in no rush to see it in person, however; not just because I am physically intimidated by its sheer size and weight, but also because it’s reportedly rather loud and can’t really compete with AIO chip chillers around the same price.

But its scale sure caught my eye.

Prepared to be the boss worldwide's most thrilling motorsport? F1 Supervisor 2022 concerns PS5 and PS4 from...
News

We may have had access to Chivalry 2 on Xbox, PlayStation and the Impressive Games...
Walkthroughs

Prepare yourself for the greatest playlist video games have to offer. Join http://www.WatchMojo.com as we count down our...

Is The Moonlight Greatsword In Elden Ring?

The famous From Software weapon might be making a...

Hunt: Showdown is now out on Playstation 4! Savage,...

Upgrade your version of Two Point Hospital to the...

Rainbow operatives are back in action against a threat...

Adorable Kirby Plushies Arrive In Time For Kirby And The

The concept of an escape space is currently...

It was only the other day when a...