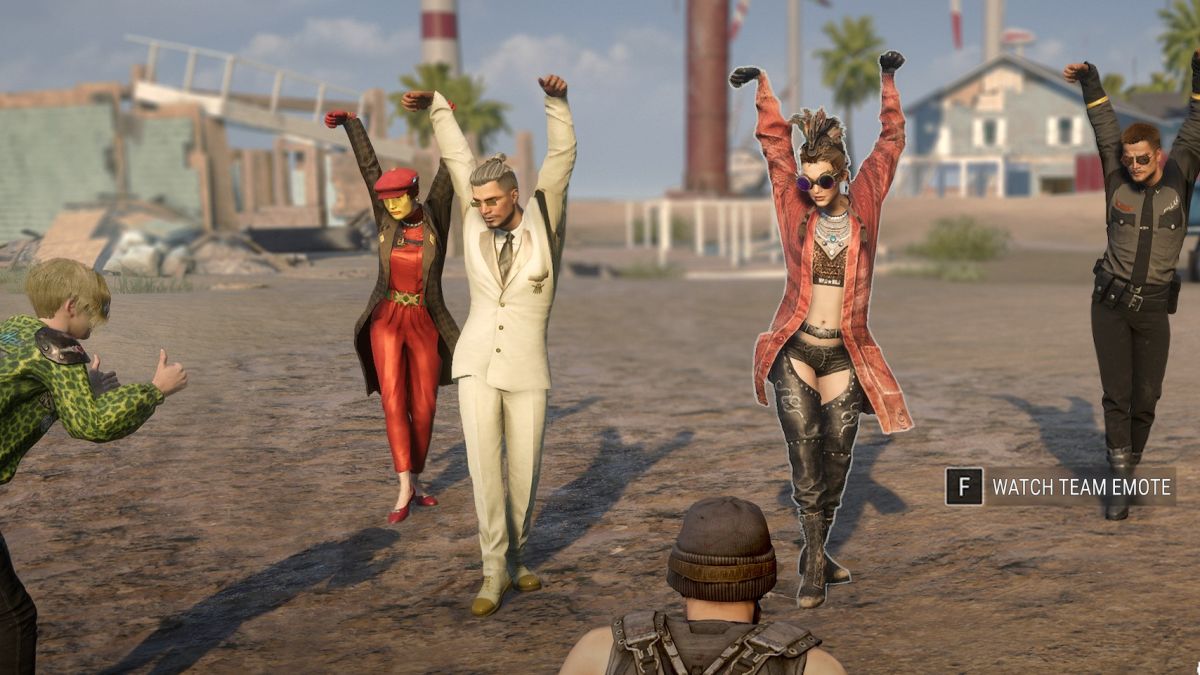 However, I would like to draw attention to this feature of the new patch. The one where you can watch other peoples’ teams pull off their sick dance moves, complete with getting tuned in to their music and having your character cheer them on.

For all that Battle Royale news usually focuses on the sweaty frenzy surrounding competition, guns, and strategies, you have to remember that at their core these are social games you play with other people. They’re supposed to be fun, and what’s more core to the social multiplayer game than doing goofy things in the lobby or town before the round starts? I applaud this.

Anyway, the sweaty gun minutia is pretty neat this patch too. First, gear: There’s a Blue Chip Detector that, while it takes a primary weapon slot, scans for enemies within 100m of you and shows the nearest 12 of them on the map. There’s also a folding shield, portable heavy cover that has a fat stack of HP for blocking hallways or when your caught in the open. The Deston map also adds the MP9, a fully-automatic 9mm submachine gun—the key is that it’s 9mm, so even if it’s not a beast like the P90 the ammo is absolutely everywhere.

Deston’s also getting the Pillar Security Car, a speedy beast with sirens and lights so you can flex very hard as you chase down other teams. There’s also sweet gear in the trunk.

The Assassin’s Creed collaboration, which before today’s Destiny x Fortnite leak (opens in new tab) I would have called the weirdest one so far this year, has a lot going on. It adds back the Haven map for the first time since 2020, and has AC antagonists Abstergo take over a big building. There are some leap of faith ledges on the rooftop, in case you like jumping off buildings, and a bunch of cosmetics to earn throughout the season.

I leave you with this image, also from patch 19.1, which is a bunch of new craftable gear to wear.

A license to kill, and a license to make some pretty darn good games. Good on you, James. For...
Nintendo

Where to get your Qix this month. Should...

Check out the launch trailer for the cyberpunk thriller,...

Sonic at the Olympic Games: Tokyo 2020

Check out the launch trailer for Sonic at the...

Unfortunately, someone did not get Doom running in a McDonald’s

Bungie has responded swiftly to an assault of...

This week on All Things Nintendo, Brian is joined...

Not long after I start The Mystery of the...