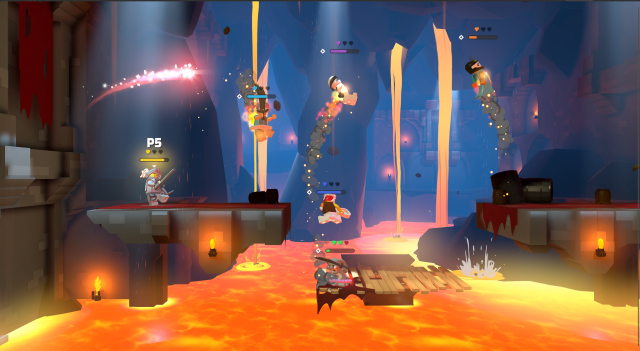 This isn’t your standard brick-breaker. We’re not talking the likes of Breakout: Recharged or Radon Blast; these bricks are of a very different variety. Featuring some classic Minifigures from some of LEGO’s biggest themes, can you smash your way to victory in LEGO Brawls on Xbox, PlayStation, PC and Nintendo Switch?

This LEGO take on Super Smash Bros. will have you designing your ultimate LEGO Minifigure brawler before pitting it against the rest of the world. Mix and match between classic LEGO themes including Pirate, Ninjago, Monkie Kid and many, many more. With more than 77 trillion combinations across all Minifigure parts, there will be no shortage and wacky and crazy designs to battle against.

“LEGO Brawls showcases LEGO play in a brand-new way with its awesome family friendly fun. Customize your minifigure and team up with your friends for some supercharged action, across all your most loved LEGO themes,” said Murray Andrews, Head of Publishing at LEGO Games.

LEGO Brawls will feature cross-play across platforms, local and online multiplayer for up to eight brawlers and a suite of different modes. Build the Minifigure of your dreams and climb those leaderboards!

Check out the launch trailer below:

LEGO Brawls is out today on the Xbox Store priced at £33.49. A fun fighter for the full family to enjoy, our review will be on the way soon. For now, let us know in the comments if you will be picking this one up.

Dream up the ultimate Minifigure brawlers and bash your way through all of your favorite LEGO® themes in the first team action brawler set in the LEGO universe. Play with friends at home or around the world and see how you stack up against the competition. BUILD THE ULTIMATE BRAWLER Design your ultimate LEGO Minifigure hero with unique style, strategy and personality. A cactus with an attitude? A scrappy janitor ninja who happens to have fighting chickens? A sledgehammer-swinging clown with a few scores to settle? Sure! Build the ultimate brawler and level them up with unlockable content! BATTLE THROUGH EPIC LEGO THEMES From the swashbuckling shores of Barracuda Bay, to the waterlogged caverns of Ninjago® Seabound, to a dusty wild west saloon and the mythical Monkie Kid jungle, all of your favorite LEGO themes are brawlable! Collect unlockable minifigures, power-ups, and emotes along the way. CROSS-PLAY WITH FRIENDS ACROSS PLATFORMS Team up and brawl 4v4, party with friends, or play a battle royale-style game mode where it’s “every-player-for-themself”. With multiple game modes, levels have unique challenges and win conditions. BATTLE AND BUILD YOUR WAY TO THE TOP OF GLOBAL LEADERBOARDS How tough are you? Battle to the top and track your rank against everyone else in the world! Do you have what it takes to be the best?

Think you’ve got what it takes to be a Team Principal of an F1 team? As we draw...
Walkthroughs

Cheaters never prosper. For more awesome content, check out: http://whatculture.com/gaming Catch us on Facebook at: https://www.facebook.com/whatculturegaming Find us on...
PC

Dominaria was Magic: The Gathering's first setting, and remained central to its early storylines—like the epic saga dealing...

Join us for a blazing run through the past...

We meet a few more of the Andromeda Initiative's...

Know By Heart… Is Now Available

How Does Time Travel Work in Kingdom Hearts?

We begin our journey through the more puzzling aspects...

Fans of Dead by Daylight know that deep within...

Marvel's Midnight Suns is the latest game to be...

Despite food playing such a big role in Minecraft,...